Dear Readers,
Beginning in the admissions process at Windhorse, when we first meet a potential client and their family, we often encounter a blizzard of variables around how someone’s extreme state experience came to be. We attempt to understand this from their perspective, doing what we can to learn the language of the individual and family system, all with the intention of determining whether we think we can possibly be helpful to them—whether or not they become our clients.  Of course, at the same time, our potential clients are trying to figure out if we look reliable, whether we know what we’re doing, and if they’re interested in being in this kind of relationship with us. For these people looking for help, naturally flowing through this conversation is intense hope, fear, and uncertainty… And stated or unstated is always the question, “How does this work?” At this stage of our evolving relationship, and given what we know about the complex path of a Windhorse Team, offering a meaningful answer to that question can be a tall order. However, what we’ve generally found is that for people who have some kind of resonance and openness to our unusual approach, they can feel that we’re engaging them with an unanticipated kind of respect. We may not come out and say this straightaway, but that respect is based on regarding them as being fundamentally sane. As such their problems, though perhaps extreme, are human and workable—types of confusion that are not the most fundamental part of who they are. We have total confidence in that knowledge, so while attempting to understand the nature of their confusion and suffering, we’re simultaneously beginning a conversation with their intrinsic health and sanity. In the overall Windhorse therapeutic process, beginning in Admissions, that’s one of the ways people begin experiencing glimpses of clarity amidst the disorienting uncertainty inherent within extreme state experience. The beginning phase of answering the question, “How does this work?”, is the experience people have as we begin a conversation with their fundamentally sane basic nature.

Recognizing everyone’s intrinsic sanity is the most fundamental principle of our approach, and this was the focus of our Journal entry #005. What I refer to as the second principle is that we are inseparable from our environment. In some ways, this may sound counter-intuitive, as we often experience the world as being comprised of separate objects and energies. But as we scratch the surface of this with just a bit of analysis, we know that we’re no more capable of existing independently from the conditions of our planet and atmosphere, or from our national and local political processes, or from the influences of our relationships, or from the food, air, and water we consume, than we can escape the Earth’s gravitational field unaided. In Journal Entry #021, Elizabeth Mattis Namgyel and Gretchen Kahre spoke eloquently of the interdependent nature of all phenomena, using contemporary examples and sensibilities to explain ancient Buddhist teachings on this truth.

An implication of this interdependence is that when we are in environments that don’t support our health and sanity, we become vulnerable to all manner of illness and problems. An example of this could be having our domestic world in disarray: not eating or sleeping in a good enough rhythm, personal finances being out of control, and perhaps living in isolation. No one will function optimally in such an arrangement. Another example is described by Sebastian Junger in his book, Tribe, where he cites what appears to be a link between the greater incidence of mental illness and suicide with the most affluent elements of Western society. He argues that as the relational fabric of our society becomes less inter-reliant, resources become less equitably shared, and people feel less important in one another’s wellbeing. This way of life moves us further away from how we evolved as a species: living in smaller groups of people with meaningful relationships, where we felt necessary to one another as well as to the tribe.

This tribal inter-reliance and more human way of living is in stark contrast to what most of us might identify as qualities of modern Western life. Instead, we might describe a world that feels increasingly, and alarmingly, indecipherable. Consider the functioning of our culture, our financial and political systems, the spiking advances in technology (think A.I. and biotechnology, for instance), and the accelerating environmental changes on our planet. In the midst of these processes, we may feel quite incapable of exerting meaningful control in the greater world. And though we may feel disconnected, and at times strongly wishing that we really could be disconnected, of course we’re completely interdependent with these processes. The knowledge of that, consciously and unconsciously—especially for some of the more sensitive and vulnerable among us—can create a toxic, dissonant psychological undertow. As Junger stated, “Humans don’t mind hardship, in fact they thrive on it; what they mind is not feeling necessary.” Feeling disconnected and unnecessary may not be the leading cause for why people experience confusion in their lives. But as an atmospheric condition in our modern world, I believe this contributes to a wide range of disturbances, including extreme mental states for some. 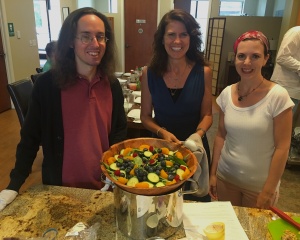 Let’s go back to our friends who are having a conversation with the Admissions people. A key understanding we communicate is the very positive implication of this principle of being inseparable from our environment. That is, if a healthy or sane environment is created, it will generate a powerful invitation for everyone’s intrinsic sanity to be roused. As we describe what such a whole person environment looks like in a Windhorse team, a picture begins to form of ordinary, healthy life: The physical level is grounded and well cared for, both one’s immediate body and the existence of a nurturing home with good domestic disciplines. The emotional and social aspects of the environment are key in providing that experience of being part of an inter-reliant tribe—in this case a therapeutic team. These relationships are characterized by an open attitude to actually being in life with each other, respecting each other’s completely unique expression of sanity–not simply relating to the client as someone to fix. It’s primarily in the context of these relationships that someone can reconnect with and explore their passions and intelligence, coming back into balance within a healthy social system. And critically, in order for someone to tolerate the ruggedness of a path of recovery, strong and resilient relationships are the primary binding elements that allow the therapeutic team to endure.

At the mind level of this whole person environment, we create an atmosphere that invites everyone to be awake to their highly individual experience of intrinsic sanity. Over time, this tends to clarify confusion, and out of that an allegiance to sanity begins to strengthen. As we join our intention to reduce confusion with evolving disciplines, it’s not just possible to create a sustainable path of recovery, but highly probable.

Again, to the question of, “How does this work?”, as our new friends going through the Admissions process hear healthy, ordinary, and balanced life being described, it’s so often in stark contrast with how life has been going within their extreme state world. On a basic human level, we know that when our environment is seriously out of balance, disconnected from healthy relationships and out of rhythm, it’s difficult to thrive in that state of chaos. To begin recovery from extreme state confusion in that kind of exterior disregulation is nearly impossible. Even if a detailed understanding of the efficacy of creating an environment of sanity isn’t immediately clear (which is nearly impossible at this stage of the process), people often experience a strong intuitive sense that what’s being described is undoubtedly moving in the right direction.

Given our decades of experience with this approach, we have confidence in the power and potential of such an environment. Not everyone needs or wants this, but for many people it is exactly what is required to begin—and sustain—a path of recovery.

We consider Chogyam Trungpa’s paper, Creating An Environment Of Sanity, to be the root instructions for Windhorse practitioners. In it he describes the ordinary and earthy goodness of such an approach:

It is not true that, if someone has seemingly gone too far into neurosis, we can’t do anything. We can help people, even those who have gone too far, beyond the regular channels of communication. The basic point is to evoke some kind of gentleness, some kindness, some basic goodness, some contact. When we set up an environment for people to be treated, it should be a wholesome environmental situation. A very disturbed or withdrawn patient might not respond right away—it might take a long time. But if a general sense of loving kindness is communicated, then eventually there can be a cracking of the cast-iron quality of neurosis: it can be worked with. This can be arduous. But is it possible, definitely possible.

This principle of being inseparable from our environments will be the featured topic in our podcast for Journal Entry #023. In the near future, we will also be presenting podcasts in which the remaining two principles will be discussed: the third, recovery is the path of discovering and synchronizing with one’s health and sanity, and the fourth, no matter how disturbed a mind has become, recovery is possible.

Thank you for joining us, and if any of what you’ve just read prompts comments and questions, we would greatly appreciate you sharing your thoughts.

Chuck Knapp, M.A., L.P.C., a student of Chogyam Trungpa and graduate of Naropa University, worked closely for many years with Dr. Ed Podvoll, originator of the Windhorse Approach. Chuck was a founding member and later director of Friendship House, which was a publically funded residential treatment home for people with extreme mental states. In 1990 he co-founded Windhorse Community Services in Boulder, Colorado, where he continues to serve as a Co-Director. Through his published writings, presentations at conferences, and as co-founder of the Windhorse Journal in 2018, Chuck continues to share his interest in exploring mindfulness-based therapeutic environments for both individual and social wellbeing.