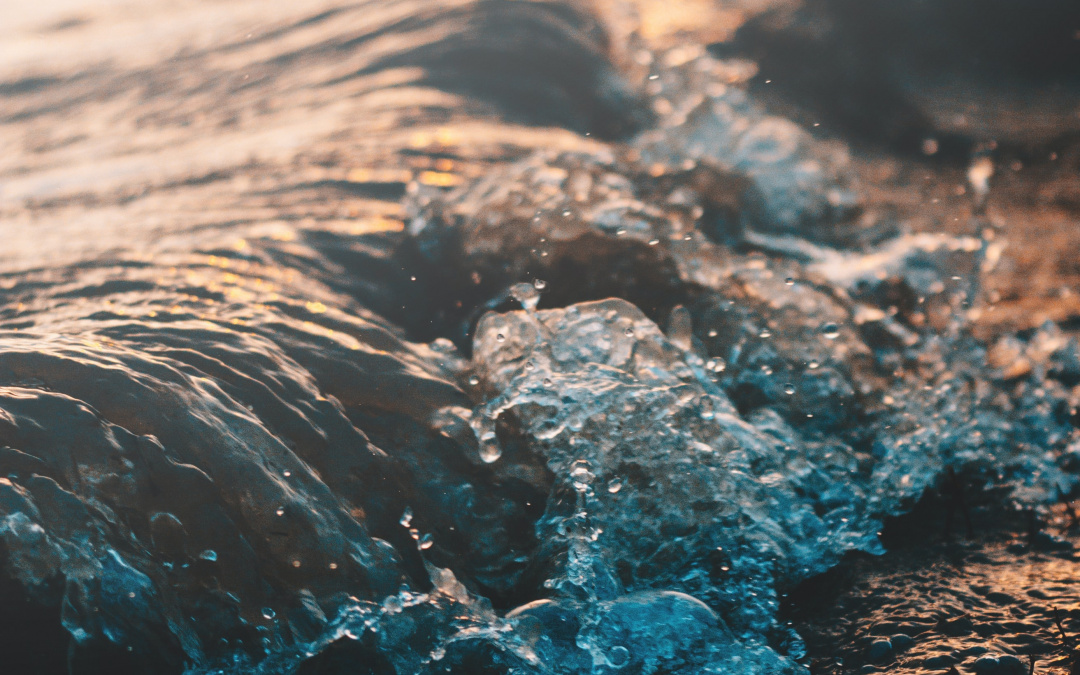 It’s laundry day, and I’m wearing very out-of-season blue jeans. It’s mid-July, and it’s blazing hot. Kelly is not only wearing jeans, but a dark, long-sleeved shirt and army boots. Her thick black hair hangs over her pale cheeks like a hood.

Kelly struggles with a variety of extreme states of mind, one of which is a form of OCD that includes body dysmorphia.

[Body dysmorphia is a condition that makes it difficult to stop thinking about one or more perceived defects or flaws in one’s appearance — flaws that appear minor—or can’t be seen at all—by others.]

In short: being outside, in public, is very low on the list of things Kelly enjoys doing on sunny summer afternoons.

But we’re on a mission. At the behest of Kelly’s psychotherapist, we’re engaging in a kind of exposure therapy by strolling around a busy shopping district near her apartment as a part of our basic attendance shift.

As we weave our way through the crowds, Kelly’s piercing green eyes are wild and working overtime. One has the sense of being in the presence of a prey animal: it’s like she’s anticipating an ambush, poised to bolt for cover.

“How’s it going?” I ask after several minutes of silence.

When she’s not scanning the faces of passersby, I catch her glancing at her reflection in shop windows, adjusting her hair and clothing. With each store window she seems to be asking, how do I look now, in this window, from this angle?

We’ve been meeting twice a week for 3 hours at a time for about a month now. From what I’ve gathered so far, Kelly was bullied viciously throughout middle and high school, mocked for her looks and her social awkwardness. Bright and intelligent, she suffered a devastating psychotic episode that forced her to drop out of college. She’s been in and out of psychiatric hospitals for several years. She expresses feeling anxious and hopeless much of the time. She is deeply—and understandably—mistrustful of others.

I’m enjoying getting to know her, though I’m not sure she always appreciates my company. She sometimes seems irritated and burdened by our basic attendance shifts. “Shifts don’t really help,” she’s said in the recent past, “nothing helps”—and she doesn’t need prison guards or babysitters. She’d rather sleep during the day, play video games at night, and work on finding the right cocktail of recreational drugs and psychiatric medications. Human connection is too much work.

“What do you think, should we pop into Starbucks and get something cold to drink?” I ask, filled with hope—and dehydration. “I don’t know,” she replies flatly, “I don’t think so.”

I begin to notice some anxiety in myself, and my own self-consciousness: is being out here a bad idea? what are we even doing? am I a prison guard, taking a begrudging inmate out for a stroll? a hapless babysitter?

I ground myself by allowing the anxiety to be there, sensing my body, and tuning in to the world around me. I feel a sense of tender protectiveness towards Kelly, and a deep sense of respect for her willingness and courage to engage in this activity together.

We’ve managed to weave our way through the pedestrian mall and we’re now walking down a less busy strip mall. I again suggest we take cover from the heat. Kelly agrees this time, and we enter a large department store to cool off for a few minutes before heading back to the apartment.

The air conditioning is sublime. The store, unfortunately, is quite crowded. Kelly walks closer to me, trailing just behind as I pick up random items and invite her to look at them with me. She seems grateful for something to focus on. We examine in great detail a wide variety of sundry items that we have no intention of purchasing.

My ears perk up as Anthony Kiedis croons poignantly (through the speaker system overhead), “At least I have her love, the city, she loves me. Lonely as I am, together we cry.”

Kelly is humming quietly. She seems more relaxed, and we’re walking slower. She eventually joins in the game and picks up an item.

Kelly holds a small inflatable pool up to her face for me to examine. The box features five joyous children frozen in various forms of glee—splashing, laughing, running, jumping. All goggles and smiles. Kelly puts a big silly grin on her face, imitating the children.

“Where do you think those kids are right now?” I wonder aloud.

“It’s like 1000 degrees outside, so hopefully in a pool somewhere,” she quips, a glint of playfulness in her eyes.

I laugh, feeling the spark of her humor. “What if this picture is like 30 years old and these kids all grown up now?”

Kelly cocks her head in amusement.

“Yeah,” I continue, “maybe the kid in the green shorts is an unemployed stockbroker who spends all day at the racetrack talking about the good ole days when he was an up-and-coming inflatable pool model.”

We begin spontaneously weaving progressively more elaborate tales about the adult lives of the children in the photo. One story builds on the next, and soon we’re overcome with laughter, hardly able to catch our breath between the tears and belly laughs.

The walk back to her apartment is a breeze of delight. We stop in a coffee shop and get a couple of to-go cups of ice water. Our awakened playfulness and curiosity continues to unfold; we notice and comment on the world around us. Kelly doesn’t seem to be scanning the environment so diligently; she’s making eye-contact with me as we talk, and I feel a burst of happiness as she pulls her hair behind her ears and exposes more of her face to the world.

As we’re approaching the entrance to her apartment building, Kelly falls quiet and stops responding to my questions and observations. Looking down at the ground for several long moments, her face scrunched up, she finally questions ruefully, “I wonder what the people in Home Goods thought of us.”

“I don’t know,” I answer, feeling protective. “And honestly,” I add, with some force, “I don’t really care what they thought.”

This gets her attention, and she looks up at me, wide-eyed. I continue, more playfully now, “Whatever, they probably thought we were on drugs. I’m pretty sure I saw the store manager calling the police.”

There’s a long pause. Uh-oh, I’m wondering, was that too much, maybe I should…

Kelly’s face broadens into a smile: “Yeah, you’re right. The SWAT team is probably going to kick my door in later today.”

“For sure,” I agree mock-seriously, “we might as well go down to the police station and turn ourselves in right now.”

Our shift time is up. We thank each other for the walk, clink water cups, and wish each other a good afternoon.

The basic attendance shift recounted above became the stuff of legend between Kelly and me—the origin story of our connection. Over the course of her three-year journey with Windhorse, Kelly’s process could be like a roiling ocean with terrifying bolts of intrusive thoughts, the distant rumbling thunder of paranoia, looming swells of overwhelming emotions. The lightness, joy and connection that arose in the crucible of our relationship felt to me like a raft during the intensity of these storms. Over time, that raft seemed to grow into a lifeboat, then a small yacht, and finally a seemingly unsinkable ocean liner.

Kelly and I discovered many other “lifeboats” to hang out in, so to speak. We discovered a mutual love of space science, and our conversations on the topic often brought us to a place of vibrant awe at the mysteries of life. We took long walks that helped ground us in our bodies and our sense perceptions. We sharpened our intelligence, and humility, at the chessboard. Kelly learned a basic mindfulness technique from her therapist, and we often began our shifts by simply relaxing together and reflecting on our experience.

Of course, our shifts were just one aspect of a larger team experience. Kelly worked diligently with her psychotherapist to address her symptoms and to begin to heal the root causes of her complex suffering. She worked closely with a psychiatrist on a variety of medication adjustments and eventual reductions. She formed unique and supportive relationships with each of her team counselors and her housemate.

Kelly’s intrinsic human qualities of joy, curiosity, and kindness shone through the clouds of her confusion more and more readily; her aspirations for creative expression, intimate relationship, and meaningful work grew ever-stronger. Old capacities took on new life—Kelly began playing the violin for the first time in several years, and she finished her undergraduate studies in chemistry with gusto. Through hard-work, and grace, Kelly gradually replaced her WCS team with a goofy dog, a remarkably creative musician and girlfriend, and a challenging but fulfilling job tutoring chemistry students.

On our final shift, as she was showing me around her new apartment in a nearby city where she was starting a new job, Kelly and I reminisced about that laughter-filled moment in Home Goods.

“I wonder if any of those kids live here in your apartment building?” I joked.

“OH YEAH”, she snickers, “I saw one of them in the hot tub yesterday. I recognized his green swim trunks—he’s pushing 40 tho, and they’re waaaay too small on him now!”

As I approach the end of this brief essay, I realize that my memories of Kelly could be seen a bit like that photo of those laughing, leaping, splish-splashing children. Frozen in time, perhaps. I don’t know where Kelly is or what her life is like: is she a chemistry professor? is she still dating Lynne? how is Flea, her dog?, I could wonder. But rather than weave stories about the unknown, my heart is drawn into a precious moment of quiet gratitude, appreciating the timeless joy-gift-grace of simple, surprising—and surprisingly simple—human connection. 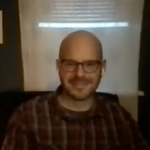 Jeremy Ellis is a Team Leader & Assistant Team Leader at Windhorse Community Services. He began his journey at WCS as a housemate in 2015. He enjoys a variety of contemplative and creative practices and is currently obsessed with his new instantpot.