53. SCOTT’S PATH OF THE HEART: A Commentary on the Film, Autism: One Man’s Journey 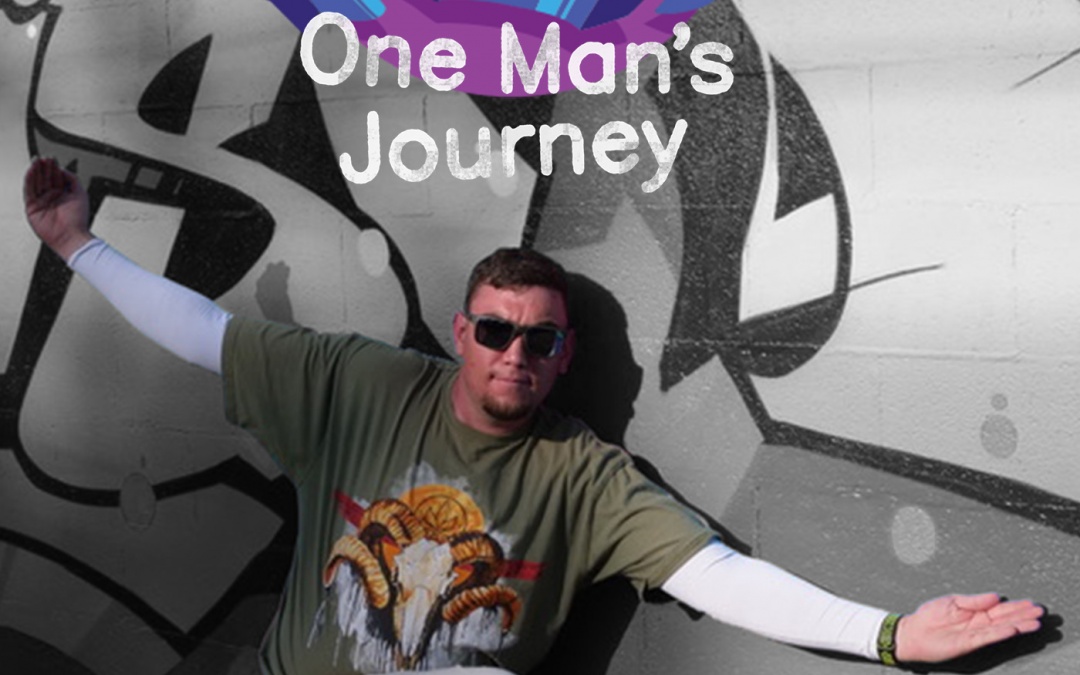 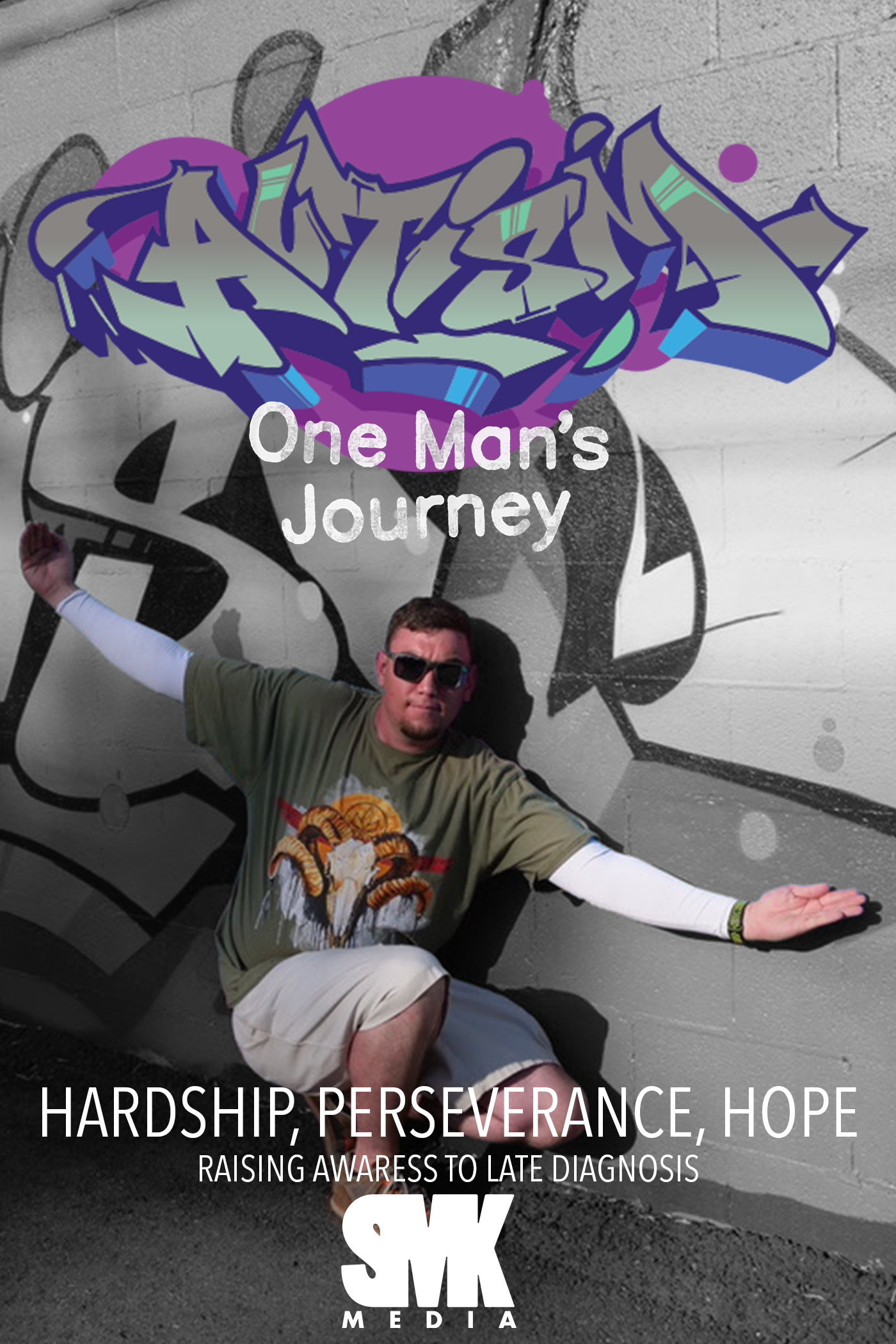 We are pleased to continue to focus on our client Scott Klumb and his life with an autism diagnosis, which is documented in his autobiographical film. Our previous post featured a conversation between Scott and his psychotherapist, Jon Garson, prior to the March 10th release of that film. Scott spoke about how he came to be both filmmaker and subject, boosted by a serendipitous meeting with Temple Grandin, well-known for both her own autism and advocacy for others. Her advice about forging an identity beyond diagnostic labels is manifest in the film.

In this post, Scott’s current Windhorse Team Supervisor, Chuck Knapp, reflects on the growth he has observed in Scott—a result of personal determination and the willingness of a supportive team and family to ride out the bumps with him.

Ironically, it was the diagnosis of autism—and the work of understanding its role in painful mental states and confounding behaviors—that has allowed Scott to move beyond a life defined by that label. Filmmaking has given him purpose, stability, confidence, and joy. And he is fusing that with a desire to make the path easier for others. This is the best of what we strive for in Windhorse work. We hope you find it inspiring.

SCOTT’S PATH OF THE HEART:

A commentary on the film, Autism: One Man’s Journey

Scott Klumb and I first met in January of 2018, when I became the supervisor of his existing Windhorse team. Part of entering the team was to freshly assess the strengths and challenges at hand, and as I got to know Scott, his family, and his team, a number of very positive elements stood out to me. I was immediately struck by Scott’s strength as a person, his sensitivity, intelligence, and attention to detail. I was also impressed with his dedicated and very loving family, as well as having a deeply committed and longstanding team. Importantly—and as what I took to be a very good sign—I immediately liked Scott.

However, by far the most striking element I experienced was that it felt like some kind of big shift in his life was underway—like I’d just stepped into a large wave of energy that had yet to take an identifiable form. As much as I had no idea what that meant, I did have the sense that it was imperative for all of us involved to rouse our awareness, creativity, and to pay very close attention to what we were doing. It was clear that Scott certainly was, and it mattered to him that we were as well.

In what would turn out to be a wonderful piece of timing, just as I began working with Scott, Jon Garson—a psychotherapist with extensive autism experience— also joined the team, first as a consultant, and later as Scott’s therapist. Jon’s presence became one of those synchronistic convergences—perhaps reflecting that the time was ripe for change. But without question, Jon became a change agent for all of us: for Scott, his family, and the Windhorse team. Whatever was afoot, Jon clearly became the right person at the right time.

Looking back on what was emerging at this time, I now understand it as the beginning of a new phase; a door was opening for Scott, revealing much more about how his autism worked. With that, his powerful desire for a healthy life was less impeded and gaining remarkable traction; a lot of positives were coming together, and his confidence was unmistakably blossoming.

Before saying more about Scott’s autism, it’s important to note that in this era, autism is most commonly identified in early childhood, prior to elementary school. However, with a late diagnosis—in his case at age 21—particularly difficult problems can develop with a disability being so long misunderstood. Combined with Scott suspecting that “something’s wrong, but not actually being able to put my finger on it”—a fertile ground had been created for compounding frustration, confusion, and layers of trauma.

In Scott’s own words, while recently reflecting on his autism, “Imagine not knowing what’s wrong with you for most of your life and not getting the help you need until much later on. If I knew what was ‘wrong’ with me as a kid, I would have been able to get proper schooling and proper therapy. As it happened, I didn’t even start getting therapy for autism until after I was 21. After traumatic therapy experiences at around 21, it took several more years to find the right therapy.”

Prior to his autism diagnosis, knowing something was “wrong,” Scott would sometimes say to his family, “I want to know why I’m different.” But once autism was explained to him, he could completely relate to the autistic person quoted in the book Neurotribes (page 480), “For me, getting the diagnosis in mid-life was like finding the Rosetta Stone to myself.” Similarly, in speaking with his Mother, Nancy, Scott’s autism diagnosis was a life-changing relief for the family. There was actually a pattern beneath what had appeared as unrelated difficulties. While the diagnosis didn’t immediately relieve Scott’s bewilderment of living in a world that’s predominantly organized along neurotypical (non-autistic) expectations, this new way of thinking began opening doors for how to move forward.

Life during this time continued to draw on the abundant strengths of Scott and his family, with humor and honesty being on display as he’s able to laugh at how some of his past autistic behavior now looks. For instance, in Jon’s words as he discussed an incident with Scott, “For many autistic people, there is the concept of taking things very literally, also known as black and white/all-or-nothing thinking. Using Scott’s first psychiatrist experience prior to his diagnosis of Autism, he was told to take his medicine an hour before bed. So, he did—regardless of the actual time. The medications made him drowsy and hungover the next morning, which lead to sleeping in in order get over the drowsiness. Scott, a person who never was late and never purposely missed a day of school, now had to hide from his parents this growing tendency of missing school. As a result of sleeping in later, over time Scott was awake that much later into each evening. Finally, this led to being awake all night long, often till 6 a.m., but Scott’s literal mind stuck to doctor’s orders to take meds an hour before bedtime, further screwing up their efficacy, and increasing his feelings of isolation and depression.”

Though Scott and his family were relieved when they understood he was autistic, Jon further states, “Being diagnosed later in life is not easy, especially after many inaccurate diagnoses. Scott’s parents were even told, ‘Here’s the diagnosis, but there’s not much that can be done about it’.” They were given a few book suggestions and some meetup groups to attend, but for Scott this actually instilled a profound sense of hopelessness. Clearly, the diagnosis was a landmark in his and the family’s life, but it was also just the beginning of sorting out what it actually meant. Then, the key task was finding reliable resources and guides for the path ahead, in order to process trauma from 21 years of life in that kind of confusion.

As I now reflect on joining Scott’s team a bit over two years ago, that wave of change I sensed has clearly shown its form; by then, enough of his experiences of trauma had been worked through and he was now able to focus on creating a healthy life in the world as an autistic person. For those who are living or working with late-diagnosis autism, Scott’s life and film offer a highly instructive example for doing many things really right. And though this isn’t the place to go into all of 4 what one could learn from his story, I’ll name some key elements that are particularly related to the message of his film.

To begin with, the fierce conviction to not give up on yourself, or your loved one, is the ground from which all efforts arise. A recovery like this doesn’t work without that kind of strong determination being held by a critical mass of those involved. This may seem obvious, and while such an instinct may be generally present for most people, strong conscious intention may actually be what keeps the path open at times when one is feeling unsure of how to proceed—especially for what can be long periods of time. And as with so many others, I also know that Scott’s family drew strength from their spirituality, which no doubt provided light for their path when it was needed most.

As both Scott and Temple Grandin emphasized in his film, it’s so important to find something that you really like to do, in order to generate movement along one’s recovery path. Aligning with one’s passion, instead of over-identifying with the diagnosis of autism, is a way to stay connected with one’s creativity and life force. As Scott states so clearly, his filmmaking and photography are activities he feels healthy doing: They’re fun, they allow him to explore his talents and intelligence, and they reliably help him to ride out the times when he’s feeling discouraged.

Fundamentally, a recovery path, like this film, is a creative process—both being products of Scott’s healthy changes as well as drivers of his evolution as a person. That evolution will no doubt be propelled by the life-changing courage it took to offer such a vulnerable “coming out party.” And deep in what he had to confront in such a courageous exploration are the boundary waters of self-acceptance, self-forgiveness, and the presence of stigma for being different.

Those of us in the world of mental health know that stigma—both towards oneself as well as from society—is a pernicious and distorting presence that many people can never even acknowledge, let alone reveal in a movie. Many don’t survive it. Stigma can’t be successfully overcome without the dawning of self acceptance and self-kindness, and like any other aspect of mind, those states are 5 not continuous. But in order to get as far through stigma as Scott has done, there’s a lot of self-acceptance, possibly even self-love, present—recognizing that I’ve been suffering due to confusion—not because I’m bad, but because I’m human.

Early in my career, I recognized that someone’s recovery is almost always more intelligent than what I imagined it would be, and this is certainly the case for Scott’s path. His changes have been dramatic and stable, and I’ve marveled at this, quietly admiring his urges toward health. To make such changes takes an enormous amount of (again) courage, in order to leave one’s familiar world behind—especially considering how difficult change can be for an autistic person.

I hope people can understand and benefit from what it took to make this beautiful and personally vulnerable movie. At the heart of it all—and I believe what allowed Scott to rouse the strength to sustain this project altogether—has been his desire to help others. From that compassionate urge, and from personal experience, his film confidently conveys a profound and essential truth to fellow travelers on the path: that no matter how confused and difficult one’s life can feel, recovery is always possible. May this truth be taken to heart by anyone needing hope and inspiration.